The Verizon Foundation, a nonprofit offshoot of the telecommunications company, and the National Domestic Violence Hotline, established by the United States government in 1996 through grants provided under the Family Violence Prevention and Services Act, recently released a short video entitled “Monsters,” which the Verizon Foundation says “shows the immediate and long-term impact on children who witness domestic violence.” Now, this is an important issue. Subjecting children to the spectacle of one or both of their parents being attacked, degraded, or tormented by the other is a form of psychological/emotional abuse that can be devastating even if no one ever raises their hand against the child. I'd praise the video for bringing this up if only the folks at the Verizon Foundation and the National Domestic Violence Hotline were actually siding with such children, rather than against them.

Now, one can- and should- object to the fact that the ad explicitly defines domestic violence to be something men do and women suffer- if my introduction to the concept of domestic violence were this ad, the notion that a man or a lesbian could be a victim of "domestic violence” wouldn't occur to me. That would be less of an issue if the makers and the typical expected viewer of this came from a culture where it was widely understood that the male perpetrator-female victim scenario described was not the only configuration possible, and children seeking help because of a violent mother weren't ignored or called liars because of traditional prejudices that “women don't do that” or feminist claims that “domestic violence is gendered,” but this wasn't made in that world. In this case the usual erasure of any victim of intimate relationship violence who isn't a heterosexual female is only a secondary problem, however.

The ad starts off with an animated depiction of a child in a violent household. We are told of her pain and distress. She lives in “darkness,” in a “nightmare.” And it is very conspicuously HER pain and distress, and SHE who lives in a world of darkness and nightmares- the consistent use of 'she” and “her” for the victimized child is not, as we shall see, merely a byproduct of the fact that English lacks a singular third-person pronoun for referring to a human being without reference to sex.

The source of her distress is explicitly referred to as her father, which brings us to the first group of children in the ad's cross-hairs. Suppose you're a little kid who's upset because you see Mommy hitting Daddy, or pushing him down, or throwing things at him, or waving a kitchen knife around and screaming about how someday she's going to cut his balls off. Maybe the sound of people yelling or screaming or sobbing at night makes it hard to sleep. Maybe you hate yourself because you think you're somehow the cause of it. Maybe you're afraid that someday Mommy will kill Daddy, or even get so angry about something that she'll kill you. Maybe part of you wishes she would, because surely she wouldn't act this way if you were a better child- and if you were gone, maybe everybody could be happy again.

And those nice people who talk about this thing called “domestic violence,” and how it's really bad, and that it's not children's fault, and that if it's happening in your house you should tell a grown-up you trust so you can get help, and that people being hurt by it deserve help and protection? They're not talking about you. They're not there to help you. They don't care about you. They've helpfully explained who the people who need and deserve help are, and you're not one of them.

Again, this wouldn't be such an issue in a world where a child whose mother abuses her father was likely to have other sources information telling her that what happens in her family is also "domestic violence," and that she and her father also deserve help, and where an adult authority figure told of such a situation by a child was likely to have also been exposed to such information, and to have internalized it to the point that they could be counted on to treat the child's situation with due seriousness. Unfortunately, people living in that world aren't the ones seeing this.

The all but exclusive fixation on male perpetrators brought about by gender feminist domination of this topic doesn't just erase or vilify male victims; it also throws many women and girls to the wolves, if the person who hurt them has the wrong genitalia. The folks who dominate the discourse about abuse typically seem, based on revealed preference, to desire the former badly enough to consider the latter an acceptable trade-off. These children get off comparatively lightly, however; they're merely written off. There are worse things.

The ad continues by saying that the girl will be more likely to be abused herself as an adult, since she will be more inclined see domestic violence as normal. And then, finally, the existence of male children comes up. After being told in anguished tones about how much girls are hurt by living in violent household, we're told “and her brother, he'll be twice as likely to become a monster himself.” At which point a little cartoon boy appears, briefly, only to immediately transform into a grotesque, ferocious-looking monstrosity that looks like some horrible beast of Greek mythology filtered through H.P. Lovecraft, looming hideously over the fragile, prone form of his helpless sister.

The little girl, of course, remains human.
Contrary to popular myth, most child abuse victims do not go on to become abusers themselves. There are many other ways a boy can be shaped by such an experience, even if they are seldom thought worthy of mention. 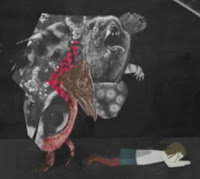 Maybe he'll grow up to think of all men as sadistic monsters, and loathe himself for being one. Maybe he'll cut himself off from others, seeing his own permanent loneliness as an acceptable price to pay to “protect” women and children from what he imagines himself to be- and what the makers of the ad want us to imagine him to be. Maybe he'll grow up to let other people abuse him because the memory of his father makes him so frightened by his own capacity for anger that he doesn't dare stand up for himself. Perhaps he'll teach his sons to “respect women” by doing likewise. (In which case he is hurting others, albeit not others the domestic violence industry cares about.) Maybe he'll actually try to stop his father, and get beaten to a bloody pulp. Or maybe he'll spend the rest of his life reviling himself for “failing” to protect his mother- for not being strong enough, or big enough, or brave enough, or loving his mom enough to somehow stop a grown man when he was only a child.

But no such boy, no traumatized boy who ought to be viewed with sympathy rather than fear and horror, exists in the universe of the ad. None ever could.

In two minutes and thirty seconds otherwise saturated with descriptions of the terrible pain and suffering inflicted on innocent people by domestic violence, the heart-wrenching litany of pain, misery and tragedy abruptly stops when male children are mentioned  and is replaced with horror and revulsion- not for the abuse or the abuser, but for the victim. Once the loathsome, terrifying boy-thing departs and the narration moves to the subject of the battered wife, the original tragic, sympathetic tone resumes. The effects of systematic emotional abuse on a helpless little boy are referred to solely in terms of how they make the boy seem scary, dangerous, inhuman, or evil.

The dehumanization is absolute. The effects of domestic violence on women and girls are bad because- as the ad pulls out all the stops to tell us- they cause women and girls to suffer. The effects of domestic violence on boys are bad... because they cause women and girls to suffer. The boy's capacity to experience pain is utterly erased, and he is stripped of any moral value as a human being in his own right. His existence and experiences are relevant only insofar as they affect people who do have moral value- women and girls. We are thus encouraged to think of traumatized male children not as victims who warrant sympathy or protection, but as menaces to be feared and despised- as monsters.

This is not unusual, though the Verizon Foundation video makes it more explicit than usual by portraying the boy as literally inhuman. Turning abused and traumatized boys into objects of fear or revulsion is a fairly common feature in discussions of domestic violence. The same is commonly true if the boy is the direct target of abuse. In public beliefs about male victims of (male-perpetrated) sexual abuse, in particular, the myth that abuse victims typically go on to abuse others is so ubiquitous and colors people's attitudes towards abuse victims so strongly that the victim's supposed propensity to abuse others in the future is commonly spoken of as if it were the primary harm of the abuse itself- the greatest evil of the abuse is becomes something that will happen to some undefined person at some point in the future, which conveniently vitiates the perceived need to feel sympathy for any actual existing male abuse victim.

(This illustrates the extent to which attitudes towards male victimization transcend the boundaries between different sides of cultural and ideological arguments. Feminists dominate the discourse about domestic violence and efforts to encourage public awareness of it, and do more than anyone else to encourage the “hurt boy=future monster” attitude in that area. The same is not true in the case of male victims of male sexual predators, however, where such an attitude is expressed by many people from a much more diverse array of ideological backgrounds and is probably most conspicuously expressed by people of conservative views who are actively hostile to feminists. Members of both groups typically have an exaggerated view of male strength that makes it difficult to think of one as truly victimized rather than victimizer, and both often seem to think of raising boys primarily in terms of neutralizing the danger they are seen as naturally posing, so this convergence is to be expected.)

There's no need to assume that anyone at the Verizon Foundation or the National Domestic Violence Hotline had this aim in mind. It is the natural, predictable product of the mindset that dominates discourse on the subjects of domestic violence and child abuse, as well as related areas like sexual violence- one that tends to treat the well-being of males (especially once they're no longer young enough to enjoy the limited moral-value-by-association of being regarded as appendages of their mother) as having purely instrumental value, if that, which is prone to regarding even the most vulnerable males as present or future menaces to be contained, and which is at best extremely uncomfortable with the idea that males can be hurt as badly as females or should be viewed with equal concern if they are and frequently outright hostile to the idea.

The best thing I can think of to sum up my feelings about this is something Jacob Taylor of the blog Toy Solders wrote a few years ago in his post “Being a Boy: 101.” He was talking about a different topic- a school speaker's treatment of a boy who had been sexually abused, rather than children who grew up witnessing their mothers being battered- but the subjects are closely related enough and his words so relevant that they're worth quoting here.

There are so many monsters lying in wait for children to tear apart, yes. So terribly many.

Email ThisBlogThis!Share to TwitterShare to FacebookShare to Pinterest
Posted by John Markley at 11:54 PM

This is a great deconstruction of that reprehensible, empathy-devoid Verizon ad.