In search of dogs to lie down with, Part II

The idea of liberaltarianism, an ideological fusion between libertarians and welfare statist/interventionist left-liberals that has been proposed by libertarians such as Will Wilkinson and Brink Lindsay, has sprung up again. (See Will Wilkinson, C.J. Trillian, and Jonah Goldberg to get the basics. Wilkinson compiles more responses here. I previously wrote about the issue here.) I confess to being baffled that this is still in the air. I can understand how this idea might have had some appeal when Bush was running wild and liberals were doing their best antiauthoritarian impression. The grass is always greener on the other side. However, for it to continue even as Obama and the Democrat-controlled Congress spend hundreds of billions demonstrating their contempt for the idea of a smaller government, and as a horde of brain dead liberal pundits rant about how “laissez-faire” and “free market fundamentalism” has caused the current crisis, is incomprehensible to me. I certainly don’t support continuing libertarian alliance with conservatives, but the idea that closer, productive libertarian association with liberals is possible is as disconnected from reality as Eric Dondero’s claims that the Republican Party is a hotbed of libertarianism.

The name "Liberaltarianism" itself strikes me as a misnomer, implying as it does some sort of merging or halfway point. The concession made by liberals, if there is any, is quantitative- a liberal welfare/regulatory state somewhat smaller, or perhaps just more efficiently run, than what we have now. The concession made by libertarians is a qualitative change to their fundamental philosophy- accepting the legitimacy and desirability of the liberal welfare/regulatory state, and with it both the basic liberal idea that society needs technocratic state vmanagement and the whole left-liberal conception of which freedoms matter most and which are disposable. I understand that even acknowledging that cases exist where more government is not the answer probably feels like a huge concession for a lot of liberals, but from a libertarian perspective it's not terribly impressive, and one needn’t be some fanatical nutjob to see this.

A lot of support for the whole idea seems to come from the notion that left-liberals and libertarians are united by a shared respect for liberty, personal autonomy, choice, what have you, and that we’re really just quibbling over details and how to implement things. The same thing used to be said of the relationship between conservatives and libertarians, and that was to a large extent the basis for an abusive, exploitative relationship between libertarians and conservatives that lasted decades and is only now dying a well-deserved death. It’s just as false here, and failing to realize this could have results just as pernicious. (Jonah Goldberg, who like many conservatives can be quite sharp when he’s analyzing liberalism instead of putting forth his own program, has a good post about this.)

Liberals consider respect for autonomy and choice an important principle only if you accept liberal assumptions about what areas of life freedom of choice is important or relevant to. The only freedoms liberals show any consistent regard for, and treat as matters of principle, are freedom of speech and sexual freedom. The former is the basis of the power, influence, and psychological and material interests of professional intellectuals and opinion-shapers, and the latter is generally near and dear to the modern secular urbanite, as well as to anyone who wants to stick a thumb in the eye of the traditional bourgeoisie or the reactionary rubes in flyover country.

(Of course, even free speech often goes by the wayside for many liberals if they feel sufficiently confident that censorship won’t turn around and bite them in the ass.)

It’s quite natural to think that whatever you like, value, and benefit from just happens to be what is objectively most valuable or important. That’s by no means a specifically liberal failing, though I think there are factors that make liberals especially prone to it. So, just as conservatives will fight to the death to protect your right to be a white conservative Christian, left-liberals deem sacrosanct those freedoms valuable to left-liberal intellectuals and secondhand idea dealers, and ignore or actively attack the others. And much as the conservative conception of freedom is likely to seem hollow to a would-be immigrant seeking work and a better life in the U.S., a gay couple hoping to adopt a child, or anyone who thinks freedom extends to things beyond owning weapons and practicing Christianity unmolested, the left-liberal conception of what rights are fundamental will be unsatisfying to anyone who takes a person’s right to his labor and property seriously, or just thinks there’s more to being free than talking and screwing as much as you like.

One of the things about libertarianism that has always been most appealing to me is that it declares a person’s right to control his own labor and the products thereof- ultimately, his right to his life- to be just as meaningful as the right of the intelligentsia to vie for influence and status or epater la bourgeoisie. In contrast to the fundamental elitism of left-liberalism, libertarianism puts the freedoms that every productive person uses and benefits from every day of his life on the same level as the freedoms that are especially dear to the intellectual/opinion-shaping class. (A virtue parts of the far Left also have, albeit in a confused fashion; more on that next time.) Liberaltarianism, by its very nature, is incompatible with this; to integrate any meaningful aspects of left-liberalism, it must accept the left-liberal denigration of private property and freedom of exchange and reduce them to the level of instrumental goods, to be tweaked and restricted and disposed of as the rulers see fit.

It's dismaying that, just as libertarians have broken away from an inappropriate and self-destructive relationship with conservative statists, we have people eager to rush into a relationship with another group at least as antithetical to libertarianism, in return for some vague possibility that we’ll get to associate with the statist elite and, if we’re really good, maybe get to play with one of the dials on the big control board a little. It saddens me to see valuable libertarian thinkers expending their energy on a forlorn hope. I’d say that liberaltarianism would mean selling our birthright for a mess of pottage, but in practice it would probably be more like selling our birthright for a blurry photograph of some pottage.

Luckily, I can’t see this taking off. Conservatives paid some lip service to libertarians’ ideas, and often seemed to act as if libertarians were their eccentric cousins- goofy in some ways, but still family. They could put on a good show of liking and valuing us, and I still think a few actually did. Liberals, on the other hand, are rarely anything but forthright in their loathing of libertarians and their ideals, and are generally quite open in their infatuation with collective endeavors, contempt for commerce, paternalistic disregard for individual choice, childish faith in government agents, and general statolatry. (Will Wilkinson describes his ideal as essentially a philosophically left-liberal state that achieves its ends through mostly libertarian means, and that seems accurate, but in his attitudes towards commerce, the market economy, individualism, grand collective enterprises, etc. he is still profoundly out of step with left-liberalism.) Conservatives were able to stomach the presence of libertarians well enough to take advantage of them, whereas I can’t imagine many liberals being able to hide their revulsion.

But haven’t I talked positively about left-libertarians and the idea of reaching out to leftists? Indeed, and I stand by that. But while liberaltarianism and left-libertarianism are often placed alongside each other and regarded as kindred ideas, I would argue that they are not only distinct ideas, but directly clash, and that the potential virtues of the further leftist reaches of the spectrum only throws the unsuitability of mainstream liberalism into starker relief. More on that soon.

Email ThisBlogThis!Share to TwitterShare to FacebookShare to Pinterest
Posted by John Markley at 1:55 PM 1 comments 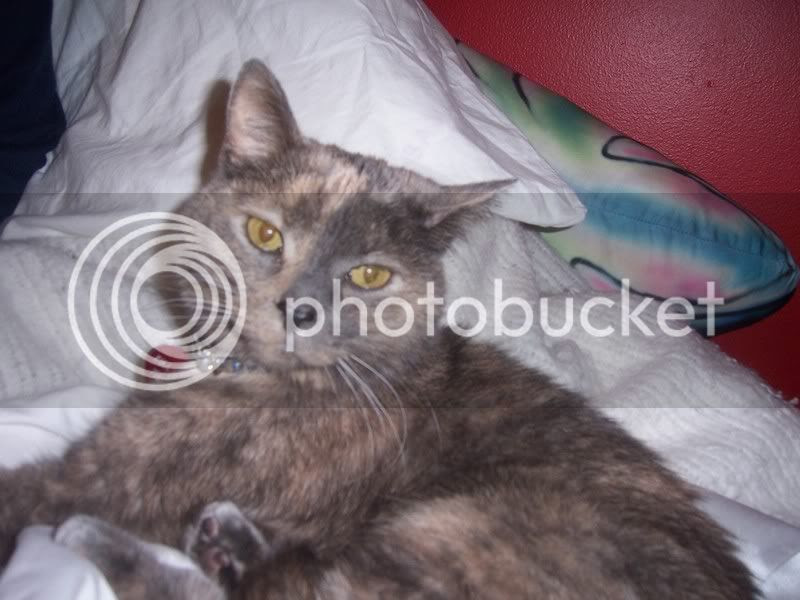 This is not even tangentially related to this site’s subject, but there’s little point to having your own blog if you can’t follow your own arbitrary whims from time to time. I’m planning on getting a new cat from the animal shelter this week, and I’d wanted to post something in memory of my old cat for a while, so now seems like the time.

I got Kira from a local shelter in 2000, when she was about 9 months old. I noticed her when I was walking past the rows of cages, and she reached out her front paw and touched me, then pushed her cheek against the cage bars and tried to rub against my hand. Quite a stroke of good fortune. Despite being fairly skittish with most people, she seemed to take to me quickly, and so I adopted her. 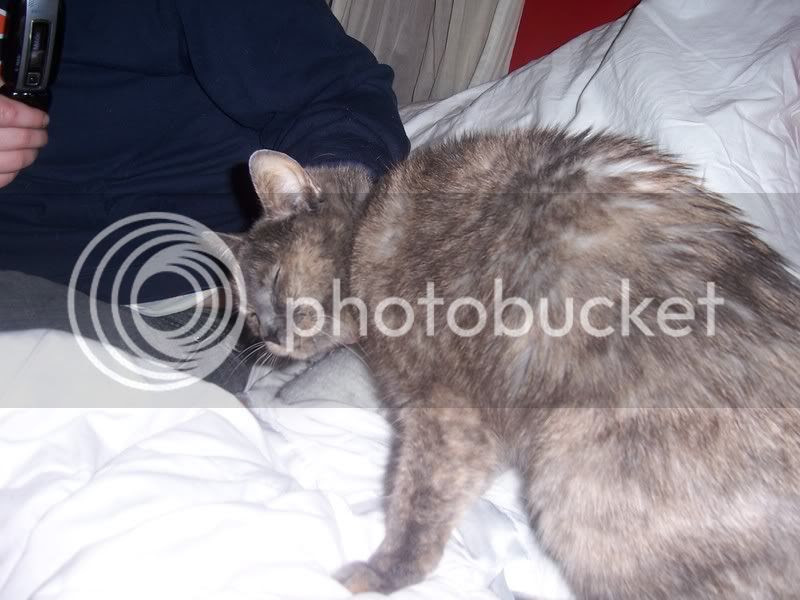 She loved to sit by the windows, where she could enjoy the sunlight and watch the birds. Once she got used to company, she liked to come up to people, sit nearby, and stick one of her paws out and rest it on the person’s hand. She would always sleep in someone’s bed, preferably with someone in it. She was quite noisy; she had a very loud rumbling purr and would greet people she liked with a sort of chirping sound.

She died too soon. On June 30th of 2008, a tumor that had been growing in her stomach suddenly burst. She had no chance of recovery, and she was put down the same day. It was very sudden; she continued on happily with her usual activities until the last few hours of her life. I’m grateful for that, at least. 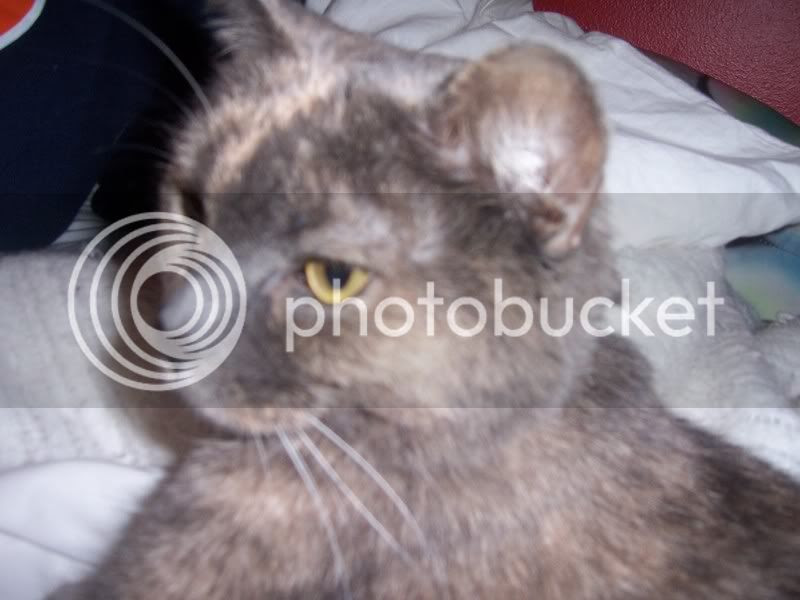 She was a wonderful cat, and I was lucky to have her in my life for 8 years. The woman in charge of the cats at the shelter (I’ve always mentally referred to her as the “cat wrangler,” though sadly her real job title probably wasn’t as cool), said she had been neglected and possibly abused by her prior owners prior to being abandoned, so I guess I was able to give her something better than she would have had otherwise. I hope I did. She deserved it.

Email ThisBlogThis!Share to TwitterShare to FacebookShare to Pinterest
Posted by John Markley at 4:16 PM 1 comments

Here’s something both amusing and frightening (Hat tip to Billy Beck): there are actually people getting Barrack Obama tattoos. American politics has been getting more messianic since 9/11, so I guess I shouldn’t be too surprised that it’s reached this level. Dismayed, but not surprised.

It’s especially absurd when you consider that Obama has been in office for less than a month, and thus no one has any idea what his lasting image will be. If he ends up in some sort of scandal or public opinion of him just goes sour, having his face indelibly drawn into your flesh could get really embarrassing a few years down the line. (Imagine going through life with Ross Perot's face on your bicep.) People who have the name of some cute barfly they met 3 hours ago tattooed on themselves at least have the excuse of being drunk.

Email ThisBlogThis!Share to TwitterShare to FacebookShare to Pinterest
Posted by John Markley at 1:43 PM 0 comments