Conservative firebrand Ann Coulter was recently having a debate with libertarian John Stossel. (Hat tip to Reason magazine's blog, Hit and Run.) In it, she upbraided libertarians for what she regards as their disproportionate interest in that most effeminate of causes, legalizing marijuana:


"Libertarians and pot! This is why people think libertarians are pussies. We're living in a country that is 70 percent socialist. The government is taking 60 percent of your money. They're taking care of your health care, of your pensions, they're telling you who you can hire, what the regulations are gonna be...and you want to suck to your little liberal friends and say, 'Oh, we want to legalize pot."


This is the sort of accusation most seasoned libertarians have encountered before. It's one side of the conservative "Why must you libertarians carry on about drugs so much" criticism, counterpart to the more common argument made by other conservatives that libertarians are wild-eyed madmen whose advocacy of drug legalization makes us too scary for the general public, rather than too bland and inoffensive. Together, they fill in the rare downtimes when we're not being told we're crypto-conservatives who care about nothing except money.

Now, it would be easy- and accurate, and satisfying- to  point out that during the 2012 presidential campaign Ann Coulter not only supported a man who voted in favor of the bank bailouts and instituted the beta release of Obamacare in his home state when the actual Obama's presidency was only a glint in the Chicago Machine's eye, she called him "one of the best presidential candidates the Republicans have ever fielded." And that this makes Coulter's disdain for libertarians' supposedly insufficient concern about economic statism somewhat hard to credit.

It wouldn't be very interesting, though. Since this claim about the supposed libertarian obsession with drugs and/or being palatable to liberals is made so much, I thought it was past time to try actually testing it. My assumption is simple: If Coulter's claim is correct, we should see at least some reflection of it in the top articles and stories at the Internet's big libertarian sites, which I will proceed to examine. This is not the most methodologically rigorous means of probing this question, admittedly, but I think it still has something to recommend it over the standard "pulling stuff out of my ass" protocol usually favored on the subject. I'm writing this in bits and pieces, with each website sampled as I get to it; there's been no cherrypicking.

Because I'm a sporting man, I'm going to exclude the Mises Institute and the Foundation for Economic Education from consideration; using the content of sites for two organizations specifically about economics might seem a little unfair. On the other hand, some might argue that the fact that I felt the need to exclude two prominent libertarian groups from our sample because one is named after an economist and the other is named after the science of economics itself tells against Coulter's claim that libertarians don't talk about the subject much.


Let's start with the Cato Institute, undoubtedly the best known libertarian think tank in America and probably the world. They once published something- about drug laws, no less- written by Glenn Greenwald, who is not only a liberal but actually has many of the opinions on foreign policy and civil liberties that many conservatives ascribe to liberals in general. (If you want a reminder of what's more typical of actual American liberalism, Google searching "Glenn Greenwald Cato," without quotes, provides a nice crash course.) That certainly raises suspicions. Topping the front page of the Cato Institute on March 5th at 4:32 PM Central Time, we find:

Poor Immigrants Use Public Benefits at a Lower Rate than Poor Native-Born Citizens
The Constitutional Case for Marriage Equality
The Fairy Tale on Spending Cuts
The Challenges of Negotiating a Transatlantic Trade and Investment Partnership
License to Drill: The Case for Modernizing America’s Crude Oil and Natural Gas Export Licensing Systems
Spending Beyond Our Means: How We Are Bankrupting Future Generations
The Flimsy Case for Stimulus Spending


So, six of the latest seven articles are about spending and/or economic regulation. None about marijuana, unless "natural gas" is some sort of drug lingo the kids are using nowadays. Cato does offer a wealth of material against drug prohibition, but it can hardly be accused of lacking interest in governmental involvement in the economy.

Well, maybe the Cato Institute is a bit too staid and stuffy and for the sort of thing Coulter is talking about. Let's try the popular libertarian site LewRockwell.com, where they take a rather more rough-and-tumble approach and have been known to harbor questionable left-libertarian types like Roderick Long. 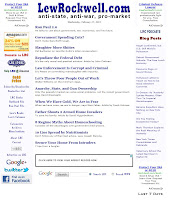 For the Wednesday, February 27th edition of the site (that being the day I ran into the original Coulter quote they have) counting both linked and on-site articles posted for the day: an interview with Ron Paul, two anti-gun control articles, one pro-homeschooling article, one  on government spending cuts or the lack thereof, one advocating repudiation of the federal debt, one against the minimum-wage, one about about a police officer facing no punishment except a few traffic citations for killing an innocent person with his off-duty reckless driving, and one each about gold ownership, home security, and nutrition. (Click the screnshot for full size.)

So... nothing, again. Lewrockwell.com certainly has had material condemning the drug war, but, as with the Cato Institute, it doesn't seem to have stopped them from vigorously going after government spending and economic regulation, and there seems to be little evidence of a trying to pander to liberals, much less a fear of offending them.

The subject matter of the article about police misconduct has some liberal appeal, but the content is very much libertarian in a way that most liberals would find uncongenial. The antiwar article might be the sort of thing you'd put up to appeal to liberals, provided you live in an alternate universe where President John McCain took office after defeating Democratic nominee Dennis Kucinich, but on Earth-One's Lewrockwell.com it probably isn't.

Let's try Advocates for Self-Government. They're largely about introducing people to libertarianism and, in contrast to the austerely scholarly Cato Institute or pugilistic Lewrockwell.com, have been known for presenting libertarian ideas in a touchy-feely sort of style that would no doubt have Ann Coulter smelling pussy from miles away. Their front page is full of links to general information about libertarian activism rather than specific issues, so let's swing by their blog for more topical material. It's most recent entries (excluding some tributes to recently passed away libertarians) are:

On the other hand, if the Advocates were trying to "suck up to their little liberal friends," surrounding said sucking up with stuff condemning income taxes and gun control seems like a questionable way to do so.

OK, how about Reason Magazine? It's known for a strong interest in personal and lifestyle freedoms. It's in bad odor among some paleolibertarians for what they regard as advocacy of libertinism and/or an unseemly drive to fit in with liberals at the expense of libertarian principles. The  people  who were trying to make "liberaltarianism" a thing a few years ago (both of them) get on well with them and have contributed there. As the website for a popular monthly magazine rather than a think tank or academic institution, it is naturally less inclined towards the sort of policy wonkish beancountery that might bias it towards economic topics. Topping their blog at 5:26, March 5th are the following:

We do have one that's implicitly hostile to the drug war, though it's also about government spending. There's one link with strong potential liberal appeal, concerning police misconduct. There's an item on drones that some principled liberals would approve of, though it's also critical of the current administration. And there are three with overtly liberal-unfriendly subjects- criticism of Obamacare, government schools, and federal labor regulatory bodies.

So, a rather weak showing for Coulter's claim, all in all. This is no surprise, of course; the deade and a half I've spent as a libertarian doesn't offer much evidence to support it, either. The nature of her dubious claim is not surprising either, since it fits a larger pattern I've noticed in criticisms of libertarians: A lot of it seems to be from people trying to hide or ignore the fact that libertarians are better at an important part of their own faction's supposed principles than that faction is.

Conservatives talk a great deal about their devotion to reducing the size and scope of government, reducing taxes, reducing regulations and other government intrusions into the private sector, but in actual practice most of them do precious little to show that these supposed principles are actually important to them. Liberals talk about how much they care about civil liberties, personal autonomy, stopping plutocracy, and the well-being and dignity of the underprivileged, and then go on to demonstrate that they don't mean it, either. Meanwhile, conservatives accuse libertarians of being single-mindedly focused on legalizing or outright endorsing "vice" and "license" and ignoring the things conservatives claim to care about, and liberals accuse libertarians of being single-mindedly focused on money and the interests of well-off white guys and ignoring the things liberals claim to care about.

(Probably the most vicious and hysterical attacks on libertarians from left of center in recent years- not that there hasn't been plenty of stiff competition were those reacting to libertarian opposition to intrusive airport search procedures. The fact that this was an unusually prominent example of libertarians actually caring about supposed liberal values like privacy, civil liberties, and individual freedom to choose who is and  who isn't allowed to touch your genitals was not, I think, a coincidence.)

As I've said before, a great deal of political rhetoric involves attacking one's opponents for traits they clearly don't have. With mainstream political groups, though, the nonsense being spewed at least resembles- albeit in a caricatured, negatively spun fashion- what its targets would often like to believe is true. Many conservatives claim to be and, at least among the rank-and-file, genuinely like to think of themselves as the die-hard supporters of free markets liberals falsely paint them as, and many liberals would like to think of themselves as the ultra-tolerant, peace-loving scourges of established wealth and privilege that conservatives imagine they are.

Meanwhile, libertarians don't even get to enjoy that small consolation. It just ain't fair.

Email ThisBlogThis!Share to TwitterShare to FacebookShare to Pinterest
Posted by John Markley at 3:03 PM 1 comments