A contribution to the canons of journalism

Warning: This post includes discussion of a recent news story about an extremely brutal incident of rape and torture. For those interested in this topic, a listing of all posts at The Superfluous Man concerning sexual violence and related issues can be found by clicking here.

News coverage of sexual violence is a very sensitive subject, fraught with all manner of potential pitfalls for the media. As someone who follows this issue with some interest, and who has some experience working in the newspaper business, I would propose the following guideline for media coverage of this issue:

A news article about someone who was held prisoner by three assailants for nearly 24 hours, bound with extension cords, savagely beaten with fists, a mop handle, extension cords, and wooden planks, doused with caustic bleach and ammonia, repeatedly raped with the same mop handle, and saved from death only by the unexpected arrival of the roommate of one of the assailants should not contain the word "lovin'" in its title or subtitle, and especially not in reference to the victim.

There are people who need to be told this. At least, they do when the person beaten, tortured, raped, and soaked in toxic and corrosive chemicals is a man. Two articles appeared in the Philadelphia Daily News, and a third at NBC Philadelphia, about an incident in which a woman named Renada Williams allegedly told two male acquaintances, Shawn Aiken and a teenager whose name has not been released, that her boyfriend had raped her and asked for their help in taking revenge. (The actual motive appears to have been relationship trouble; the only evidence that this supposed rape occurred is the story Williams allegedly told her accomplices to enlist their aid.)

Aiken and his young associate, who are apparently adherents of the Amanda Marcotte school of jurisprudence, agreed. I'll let the Philadelphia Daily News take it from here:

About 10 p.m. Sunday, Williams called her sex partner of six months to her Frankford home and enticed him with sex, McGinnis said. While they were having sex, she excused herself to let in the two males, McGinnis said.

Aiken and the teen rushed in and apparently began to beat up the Northeast man with their bare hands, but it escalated from there.

At some point the males tied the man to a sofa with extension cords and began to strike him with the wood plank, electric cords and a mop, the captain said.

Their purported deeds grew more atrocious. The thrashing from the wood plank left the victim with open wounds, McGinnis said. Aiken and the teen then poured Clorox bleach and ammonia over the man, causing stinging sores.

Then the duo took Pine-Sol floor cleaner to lubricate the mop and sodomize the victim "several times" over the time he was held by the trio, McGinnis said.

The ordeal ended only when Williams' roommate, who owns the house and rents to her, arrived at 8:40 p.m. Monday and interrupted the alleged criminal activity, he said.

Before I continue, I should note first that the actual author of the Daily News articles is not to blame for what I'm going to complain about; newspaper writers don't have any control over their own headlines. I do think it's unfortunate that the word "rape" is never used in reference to the crime, since it plays into the hands of the idea that sexual violence against men doesn't "count" in the way that comparable violence against women does, but that may also be the result of the editor or of standing policy at the newspaper and so, again, it would be unfair to lay the blame at the reporter's feet.

What inspired this post was the title of one of the articles linked above, because it's quite illustrative once you understand what you're looking at. 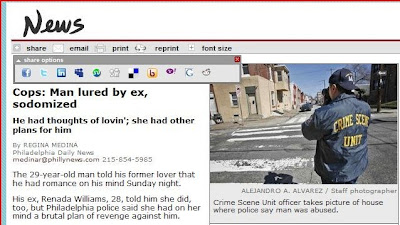 I can conceive of the theoretical possibility of a mainstream American newspaper using a subtitle this flippant and tasteless at the top of a story about a comparable crime with a female victim, if the author of the subtitle and anyone involved in checking or approving it were either a. wildly out of touch with the world around them, such that they thought it wouldn't cause a firestorm of outrage and condemnation followed by the ignominious end of their employment, or b. embittered employees who want to be fired and have decided to spite their boss by bringing an avalanche of disgust crashing down on the paper before they slip away. There are circumstances where it might plausibly happen.

(There is certainly a hierarchy of sympathy and concern into which female victims are sorted- there's a reason that White Middle-Class Girl in Peril is a news media staple and Black Public Housing Resident Girl in Peril is not, after all- but protectiveness for "female rape victim" as an abstract category imposes limits on what is considered acceptable to say about them in public. Jokes about men being raped are normal and acceptable in the mainstream media; jokes about poor or promiscuous women being raped are not, however callous some people may be towards them in their unspoken attitudes.)

The only circumstances needed for a subtitle like that to be applied to the actual story and its male victim, on the other hand, is for everyone involved to be a normal American, with a normal American's views on the subject. Who's going to complain or cause trouble? Who's even going to notice that there's something to complain or cause trouble about? Damn near no one.

I don't think the editors were trying to be malicious. In fact, the offending subtitle is attached to an article that treats the crime and the victim seriously and respectfully. That's precisely what's bothersome about it, because it's symptomatic of how deeply embedded our culture's hostility to the idea of taking male victims seriously is: Even many of the people who acknowledge their existence and try to address them sympathetically routinely do so with language that implicitly or explicitly downplays and belittles the issue.

I hope to eventually have some stuff on some related issues mixed in with my more usual stuff, because (as I've mentioned in passing before) I think attitudes about gender are connected to statism in some extremely important ways that are worth exploring. It's a bit of a detour, but hopefully somebody or other will find it interesting.

Email ThisBlogThis!Share to TwitterShare to FacebookShare to Pinterest
Posted by John Markley at 4:46 AM

I hope you will write about the intersection between gender attitudes and statism soon.

Had the woman made her false rape accusation in court, she would probably have been demonized by the opposing counsel and the press, since this happens to legitimate and illegitimate complainers alike. But since she went from alleged victim to the orchestrator of an actual crime, the scrutiny and trivialization are reserved for the new victim. It's interesting how this apparently operates regardless of gender, and how little condemnation is reserved for the actual attackers.

Just world theory, the process by which people rationalize away injustice, has given me a little insight into the phenomenon of victim blaming (there's a good introduction here: http://www.scu.edu/ethics/publications/iie/v3n2/justworld.html). Since women are generally physically weaker, they are expected to have preternatural foresight of potentially risky situations, and to avoid them accordingly. Since men are supposed to be relatively strong, they are expected to fight off any and all attackers. They are mocked if they are unable to, particularly if a sexual assault ensues. For some reason, both these extraordinary views are more mainstream and acceptable than the idea that there are ill-intentioned people who victimize the innocent.